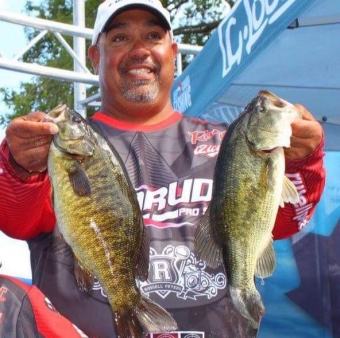 Canadians are familiar with the hilarious comedian Russell Peters, whose fame is known world wide.  Once he became a celebrity, he decided to give back to his family and sponsored his cousin Mike Brown, who's dream was to become a full time pro angler.

Having fished the tournament trail when X Zone was first introduced, Mike Brown had great success winning tournaments with both the Slammer and Swammer.  Now that the X Zone is back with the original hand pour lure, Mike has joined the Pro Staff team.

To live the life of a pro angler in Canada is a dream for most, but for Mike Brown he is able to fish for a living.  Mike got into fishing at the age of 6 years when his family fished at a cottage that they had just outside of Parry Sound.  For Mike, it was a way to relax and have fun.  His entire family would fish together.   He continued to fish throughout his life but had some career changes in 2008.  Mike spoke with his cousin and comedian Russell Peters, and it was Russell that asked Mike what his dream job would be.  Mike indicated that he wanted to be a pro angler and so with his assistance Russell helped make that a possibility.

With his sponsorship, Mike has fished the FLW Costa Series, the CSFL tournament trails and the BFL Series.  He also operates a guiding service (TFB) taking clients out for a day of fishing on Lake Ontario, Lake Erie and Gloucester Pool.  The trip provides a USB of photos from the day of fishing for the clients to take home.

In the video below, Mike Brown and Russell Peters explain how Mike got into fishing on the Bob Izumi's Real Fishing Show.

For the 2017 season, Mike will be competing in the BFL Series and the CSFL Tournament Trail, as well as Bassmania.

Mike's advice for those starting out in the fishing industry and wanting to become a pro is to "fish your strengths".