X Zone Lures, Think Outside the Box, by Matt Luna 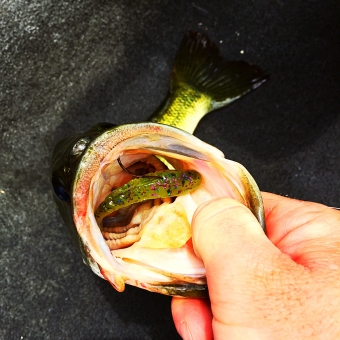 When I first looked at the X Zone Lures Slammers, I thought the ideal use for them was as a drop shot bait.  They work well on a drop shot, but I think they can be used for more than just drop shotting.

My personal favorite style Slammer to drop shot is the Slim Slammer.  There is a lot of brush in the lakes I’ve been fishing lately, and I really like the way I can fish the Slim Slammer weedless.  The fish have been liking it as well!

As I began casting the 4 inch Swammer around, I could tell the fish liked the bait. The fish would follow the bait, but they wouldn't commit to the 4 inch Swammer like they would the Mini Swammer.  After thinking about what I could do to catch these fish, I came up with an idea.

I opened the tackle storage compartment on my boat and pulled out some Original Slammers.  I rigged it with an exposed hook.  I ran the point of the hook down through the head of the bait.  I continued the hook point down through the body of the bait to about the middle.   I then brought the hook point back out the top of the bait, so the hook point was exposed.  I tossed the bait out and began working it like a soft plastic jerk bait.  I was impressed with the action I saw.  The bait glided back and forth similar to a traditional soft plastic jerk bait.  The Original Slammer can be rigged with an exposed hook or rigged weedless, and the action stays.

I began casting on the fish, and almost every cast I would get bit.  The fish in my area can be very finicky at times, especially when they’re chasing bait.  We often have to get very creative to get these fish to bite.

One thing to keep in mind if you decide to try this technique, is to use spinning gear.  I suggest using braid and tying on a fluorocarbon leader.  I was using a long 6lb test fluorocarbon leader.  Line twist will become an issue over time with this presentation.  Shortening the leader or adding a swivel a couple feet or so above the bait may help with minimizing the line twist.

The next time the bite gets tough, don’t be afraid to think outside the box and get creative with your X Zone Lures.  You never know what you might discover.